Once the desired voltage is reached the user presses the silver button releasing the stored electrical current from the capacitors which induces a magnetic field in opposition to the ring’s magnetic field causing the ring to launch. 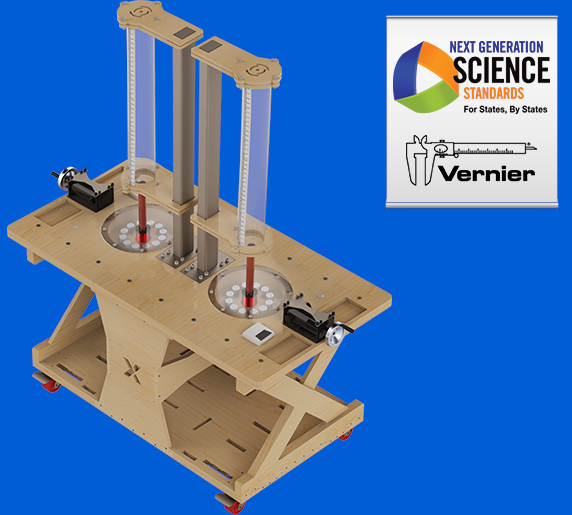 STEM Concepts Learned from use of the Electromagnetic Ring Launcher FLEXCART: Grade Bands 3-5

Magnetism and Force: Students will learn about magnetism, attraction and repulsion, and how invisible magnetic forces can move physical objects.

Models: Students will use the Electromagnetic Ring Launcher FLEXCART, a form of exhibit technology, to explore the phenomena of electromagnetism. Students will also use data and observations to evaluate the effectiveness of the model.

Variables: Students will be able to manipulate variables and observe the results on the movement of the rings.

Engineering Principles: Students will design, build, and test their own electromagnets to meet the needs of a specific challenge.

Math Calculations: Students will calculate the potential energy of the different rings on the Electromagnetic Ring Launcher FLEXCART.

Computer Science: Students will become familiar with how electromagnets are controlled by computer programming in order to propel a Maglev train down the track.

Vernier Technology: The use of theVernier Go Direct® Current Probe and Graphical Analysis™️ 4 allow students to collect, analyze and interpret real-time scientific data from their Electromagnetic Ring Launcher investigation. The Current Probe can be purchased separately at Vernier.com and is accompanied by Graphical Analysis™️ 4 as a free download with the purchase of any probe or sensor.

The Electromagnetic Ring Launcher FLEXCART includes a Next Generation Science Standards (NGSS) aligned unit plan for educational use. The unit plan includes individual lesson plans and all accompanying worksheets needed in order to teach the unit. Each lesson includes the direct NGSS alignment, a grade appropriate scientific explanation of the background for the lesson for the teacher, the activity, a way to extend the lesson and the take away. We currently offer Electromagnetic Ring Launcher supplemental curriculum written for Grade Bands 3-5 and 6-8. Grade Bands 9-12 are in process of development. (K-2 has no unit as the science is above grade level and there is no grade appropriate NGSS alignment). The following lists some of the NGSS Topics and Performance Expectations included:

Performance Expectations:
3-PS2-1: Plan and conduct an investigation to provide evidence of the effects of balanced and unbalanced forces on the motion of an object.
3-PS2-3: Ask questions to determine cause and effect relationships of electric or magnetic interactions between two objects not in contact with each other.

Performance Expectations:
4-PS3-2: Make observations to provide evidence that energy can be transferred from place to place by sound, light, heat, and electric currents.
4-PS3-4: Apply scientific ideas to design, test, and refine a device that converts energy from one form to another.

Performance Expectations:
5-PS2-1: Support an argument that the gravitational force exerted by Earth on objects is directed down.

Performance Expectations:
3-5-ETS1-1: Define a simple design problem reflecting a need or a want that includes specified criteria for success and constraints on materials, time, or cost.
3-5-ETS1-2: Generate and compare multiple possible solutions to a problem based on how well each is likely to meet the criteria and constraints of the problem.
3-5-ETS1-3: Plan and carry out fair tests in which variables are controlled and failure points are considered to identify aspects of a model or prototype that can be improved.

6-8 STEM Concepts Learned from the Use of the Electromagnetic Ring Launcher (EMRL) FLEXCART:

Physical Science Concepts: Users will learn certain science concepts such as polarity, attraction, repulsion, current and field lines. Electric charges created by using the generator produce magnetic forces and the magnetic forces produce electrical forces. Users will discover these scientific principles associated with magnetism and how electricity and magnetism are two aspects of a single electromagnetic force. This experience also allows users to discover the cause and effect relationships between electricity, electromagnetism, potential and kinetic energy to predict outcomes of this phenomena.

Computer Science: Students will be working as the Electrical Engineers who need to know and program their Arduino to sense and manipulate the magnetic fields in order to interact correctly with the magnets on the Maglev train itself to propel the train forward. They will use a PhET simulation to better understand the magnetic fields at work in order to properly program their Arduino board.

Engineering Principles: Students will use the engineering design process and team-based collaboration to design and create a working Maglev model train in this project-based investigation.

Topic: Physical Sciences/Forces and Interactions:
Performance Expectations:
MS-PS2-3: Ask questions about data to determine the factors that affect the strength of electric and magnetic forces.
MS-PS2-5: Conduct an investigation and evaluate the experimental design to provide evidence that fields exist between objects exerting forces on each other even though the objects are not in contact.

Topic: Engineering Design
Performance Expectations:
MS-ETS1-3: Analyze data from tests to determine similarities and differences among several design solutions to identify the best characteristics of each that can be combined into a new solution to better meet the criteria for success.