Hold down the button on the compass for students to activate the electricity! Students can then see the compass needle move in response to the electromagnetic field created. Next they can move a bar magnet under a fully self-contained acrylic box and watch as they cause the ferrofluid liquid to move in response. Learners can also experience the force of repulsion when they try to bring together two magnets that are oppositely charged. The experience on the Magnetic Basics FLEXCART will show that magnetism is a force to be reckoned with! 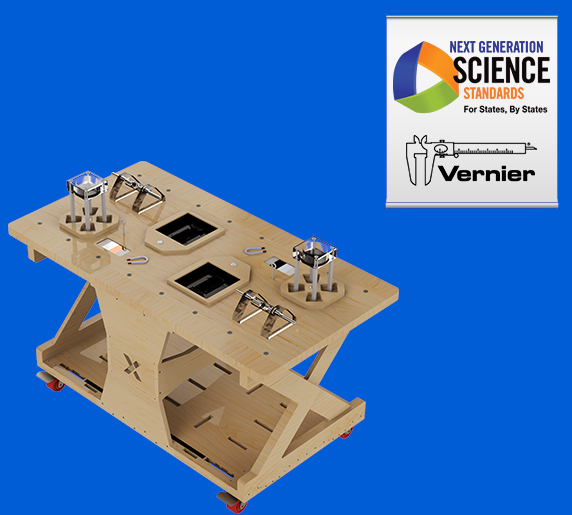 NGSS aligned curriculum for the Magnetic Basics FLEXCART is currently under development and will be available September of 2020.

STEM Concepts Learned from Use of Magnetic Basics FLEXCART:

Permanent Magnets and Ferromagnetic Materials: Permanent magnets are objects made of a material that creates its own magnetic field and ferromagnetic materials can be magnetized and are strongly attracted to magnets. Examples of this material are Iron, Cobalt and Nickel.

Repulsion and Attraction: Magnets have North and South Poles. The rule is opposites attract and same to same will cause repulsion between the poles.

Four Fundamental Forces: Gravitational (all things with mass are brought toward each other), Electromagnetic (physics of how electromagnetic force physically interacts with electrically charged particles), Strong Force (nuclear force that binds protons and neutrons together in the nuclei of an atom) and Weak Force (nuclear field strength is much less that the strong force).

Principles of Electromagnetism: Forces that causes the attraction and repulsion of electrically charged particles.

Vernier Technology: Vernier sensors and probes can be added as an accessory for the measurement of real-time data.

Engineering Concepts: Analyze data from similarities and differences between different magnets and create and design a stronger magnet from the previous prototype.