Take students through the entire design process from research, 3-dimensional modeling, to constructing, testing and revisions for creating a best performance prototype Air Rocket. Through this investigation, students will experience Newton’s Laws and the relationship between mass, force and motion. Multiple forms of technology will be utilized to perform this inquiry based investigation such as the Air Rocket FLEXCART, which acts as a form of exhibit technology used as a model rocket launch pad.

Vernier technologies can be purchased separately and used for real-time data collection which can then be applied in the engineering design process for best prototype. Discussions involving models are integrated including how models are replicas of technology and their uses and limitations. 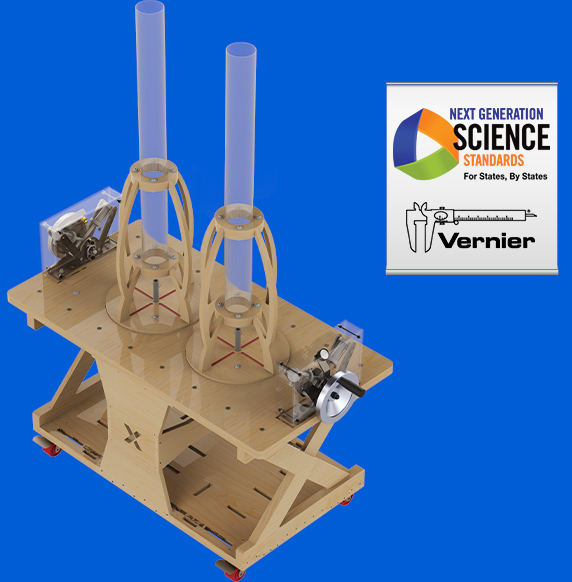 Phenomena of Newton’s Laws: Newton’s First, Second, and Third Law of Motion will be experienced first-hand through an inquiry-based investigation performed in a collaborative manner using the Air Rocket FLEXCART.

Models: Students will use the Air Rocket FLEXCART model, a form of exhibit technology, to explain real phenomena and relationships in rocketry but also use data and observations to evaluate the effectiveness of the model.

Variables: Students will be able to manipulate variables and observe the results on the flight of their rockets.

Engineering Design: Students design their own air rockets for best performance. This will include analyzing data from previous tests and changing designs accordingly. Students will work collaboratively to produce a design within a given budget and time limit which incorporates scientific principles taught in earlier lessons.

Computer Science: Using a rocket simulation, students will understand that programming involves feeding the variables into a program in order to accomplish the big picture goal, in this case, the highest flying rocket.

Vernier Technology: The use of the Vernier Go Direct® Photogate and accompanying adaptor, created by FLEXCART, allows students to collect, analyze and interpret real-time scientific data from their Air Rocket investigation. The photogate can be purchased separately from Vernier.com and used with the Air Rocket FLEXCART.

The Air Rocket FLEXCART includes a Next Generation Science Standards (NGSS) aligned unit plan for educational use. The unit plan includes individual lesson plans and all accompanying worksheets needed in order to teach the unit. Each lesson includes the direct NGSS alignment, a grade appropriate scientific explanation of the background for the teacher, the activity, a way to extend the lesson and the take away for each lesson. We currently offer Air Rocket supplemental curriculum written for Grade Bands K-2, 3-5 and 6-8. Grade Bands 9-12 are in process of development. The following lists some of the NGSS Topics and Performance Expectations included:

Performance Expectations:
5-PS2-1: Support an argument that the gravitational force exerted by Earth on objects is directed down.

Performance Expectations:
3-PS2-1: Plan and conduct an investigation to provide evidence of the effects of balanced and unbalanced forces on the motion of an object.

Performance Expectations:
4-PS3-1: Use evidence to construct an explanation relating the speed of an object to the energy of that object.
4-PS3-3: Ask questions and predict outcomes about the changes in energy that occur when objects collide.
4-PS3-4: Apply scientific ideas to design, test, and refine a device that converts energy from one form to another.

Performance Expectations:
3-5-ETS1-1: Define a simple design problem reflecting a need or a want that includes specified criteria for success and constraints on materials, time, or cost.
3-5-ETS1-2: Generate and compare multiple possible solutions to a problem based on how well each is likely to meet the criteria and constraints of the problem.
3-5-ETS1-3: Plan and carry out fair tests in which variables are controlled and failure points are considered to identify aspects of a model or prototype that can be improved.

6-8 STEM Concepts Learned from the Use of the Air Rocket FLEXCART:

Phenomena of Newton’s Laws: Newton’s First, Second and Third Law of Motion will be experienced first-hand through an inquiry based investigation performed in a collaborative manner using the Air Rocket FLEXCART. Students will conduct an investigation using independent and dependent variables, measurements and data to support a claim while learning how inertia and the relationship between force, mass and acceleration are related to the air rockets they launch.

Interactive/Exhibit Technology: Users will employ the Air Rocket FLEXCART to launch their rockets and from this experience they will learn that the Air Rocket technology acts as a model launch pad and how models are limited in their uses.

Computer Science: Students can further explore the physics of rocket launching and incorporate computer science as well by using a code.org activity. The activity allows students to role play as a computer programmer while discovering the dynamics of thrust in rocketry.

Engineering Design: Users design their own air rockets for best performance. This will include analyzing data from previous tests and evaluating current air rocket designs using the NGSS aligned Engineering Design process to produce a more competitive rocket prototype for increased performance. Rocketry design briefs will be made by students and will include design concepts such as aerodynamics of air rockets and how to reduce drag, mass and create stability. Design concepts for the nose cone, fins, materials used, and center of mass and pressure will be considered and researched.

Math Calculations: Students will solve multi-step, real-life math problems, using rational numbers to solve data calculations from their investigation. Conversions and answers will be labeled with the correct unit. Math equations for altitude, force, average speeds, velocity, acceleration will be solved, and the results will be graphed in this investigation.

Topic: Physical Science/Forces and Interactions:
MS-PS2-1: Apply Newton’s Third Law to design a solution to a problem involving the motion of two colliding objects.
MS-PS2-2: Plan an investigation to provide evidence that the change in an object’s motion depends on the sum of the forces on the object and the mass of the object.

Topic: Engineering Design
Performance Expectations:
MS-ETS1-1: Define the criteria and constraints of a design problem with sufficient precision to ensure a successful solution, taking into account relevant scientific principles and potential impacts on people and the natural environment that may limit possible solutions.
MS-ETS1-2: Evaluate competing design solutions using a systematic process to determine how well they meet the criteria and constraints of the problem.
MS-ETS1-3: Analyze data from tests to determine similarities and differences among several design solutions to identify the best characteristics of each that can be combined into a new solution to better meet the criteria for success.
MS-ETS1-4: Develop a model to generate data for iterative testing and modification of a proposed object, tool, or process such that an optimal design can be achieved.

K-2 STEM Concepts Learned from the Use of the Air Rocket FLEXCART:

Phenomena of Newton’s Laws: Newton’s First, Second and Third Law of Motion will be experienced first-hand through an inquiry based investigation performed in a collaborative manner using the Air Rocket FLEXCART. Students will conduct an investigation to discover the relationship between force, mass and acceleration as related to the air rockets they launch.

Interactive/Exhibit Technology: Users will use the Air Rocket FLEXCART to launch their rockets and from this experience they will learn that the Air Rocket technology acts as a model launch pad and how models are limited in their uses.

Computer Science: Students put a series of steps in order and follow them to accomplish building their air rocket. They learn and discuss that this is similar to what an algorithm is in computer programming.

Engineering Design: Users design their own air rockets for best performance. This will include analyzing data from previous tests and evaluating current air rocket designs to produce a more competitive rocket prototype for increased performance.

Math Calculations: Learners will graph the height of each launch and then contrast the launches using “highest”, “lowest”, “more than” and “less than” as comparison terms. They will also write a numeric equation to represent 2 of their flights.

English: Included with the unit is a suggested reading list with several K-2 appropriate books that specifically tie in to the concepts learned on the Air Rocket FLEXCART and increase the context of the FLEXCART.

Topic: Forces and Interactions: Pushes and Pulls:
Performance Expectations:
K-PS2-1: Plan and conduct an investigation to compare the effects of different strengths or different directions of pushes and pulls on the motion of an object.

K-PS2-2: Analyze data to determine if a design solution works as intended to change the speed or direction of an object with a push or pull.

Topic: Engineering Design
Performance Expectations:
K-2-ETS1-1 Ask questions, make observations, and gather information about a situation people want to change to define a simple problem that can be solved through the development of a new or improved object or tool.
K-2-ETS1-3 Analyze data from tests of two objects designed to solve the same problem to compare the strengths and weaknesses of how each performs.